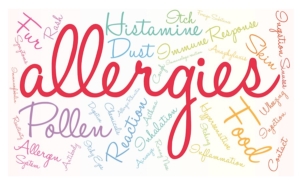 The definition and understanding of allergies used to be very simple in the past. Generally, if you came into contact, either by eating, drinking breathing or touching with the offending agent you would immediately, if not soon after, have some kind of reaction. The most common reactions being, sneezing, redness, itchy irritated eyes, itchy skin or hives and sometimes difficulty breathing. One could quickly put together the allergen to the symptoms and avoid the exposure. Allergies were considered something one was born with and would either stay away from for a lifetime or one would “grow out of.”

In the last few decades the connections of the allergen to the symptoms are not as clear. Now people are discovering they may be allergic to foods later in life where they were not before. These symptoms may happen days later and can be linked to the symptoms of behavior issues, mood swings, brain fog, digestive issues, chronic skin irritations and hormone imbalances (other symptoms are continuously being linked). The words intolerances and sensitivities have come and carpeted the lack of clear definitions that have been galvanized by medicine and academia. If you or someone you care about is having a hard time defining or having a hard time diagnosing symptoms this may be a place for you to look into as a possible contributor to signs and symptoms. Simple and free home tests such as food diaries or pulse rate can be a great place to start. A diary can be used to help one get a clear picture of their diet. One could avoid certain foods and record their symptoms 24-72 hours later and find the connections, if any symptoms exist. The pulse test is an easy test developed by an MD. Simply record your pulse rate before you eat and see if there is a rise 15 minutes to an hour later.  If there is a rise in your pulse rate-this may clue you in to a food issue. Blood tests can be ordered by your doctor. In addition, nurse practitioners, physician assistants, naturopaths and chiropractors can order these tests as well in most states. The latter physicians can order blood spot tests for foods that are cheaper and considered valid if one does not have insurance.

Testing for allergies has greatly expanded from the mid to last century. Skin prick tests were the standard. These tests can check for environmental allergens such as pollen, grass and animals. Now blood tests with assays can measure many different antibodies and have expanded our definition of allergies. They are less painful than the skin tests. The antibodies linked to immediate and acute reactions that classically are known as allergies are linked to the IgE antibodies. Now our understanding of the other antibodies may explain the delayed and other symptoms that were never connected to allergies before.

Once the foods have been identified as the cause, the avoidance of these irritants will be the best approach to relief as well as any interventions your healthcare physician prescribes.

Other causes to allergies may not be allergies at all. You may have the physical symptoms of an allergy but your body is not suffering from an allergy. What I hope to convey is that our bodies may be affected by an exposure to a chemical, toxin, or an immune interaction that creates the symptoms that are exactly what we would all think is an allergy. You may have been exposed to a chemical or toxin that your body is trying to process and the symptoms of that process can look like a cold or an allergy. Of course there are more and clearer symptoms of exposures; however allergic symptoms discussed are a positivity. A great place to find out more about this  is the book by one of my teachers “Clean Green and Lean- The Toxins That Make You Fat.” by Walter Crinnion.  The website: The Environmental Work Group is a great website as well for exposures.

There are certain body conditions that can make it easier for one to have any allergies, even seasonal allergies. Adrenal Stress Disorders and Achlorhydria are the two main underlying causes to constant allergies. Your adrenal glands are your stress glands. They are the glands that help your body adapt to all the stressors to your body. In an Adrenal Stress Disorder state the adrenal glands are running too much (hyperadrenia) or too low (hypoadrenia) causing the body to be more apt to allergies. It is usually hypoadrenia condition that is the cause to the susceptibilities to allergies. Your doctor can order standard blood tests to see if your hormones are in balance. It is usually not found this way because the standard blood tests are geared more to find if there is a severe and debilitating condition of the adrenals and is commonly known as Addinson’s Disease. There are other tests that can be used such as saliva and dried urine which can be used to find the adrenal gland’s low functioning status. They are not used to find a pathological condition by a lower functional condition of these glands.

If you cannot break protein down to its basic building blocks (amino acids) your body will react to your food like an invader and create an immune response. In addition, your digestive process will slow down and cause congestion that the body will build up and can cause the symptoms of irritable bowel syndrome and congested sinuses.
The best way to see if your stomach is the cause to your symptoms is to avoid mixing proteins (defined as meats and eggs) with starchy foods (defined as potatoes, rice, breads, pastas and fries) at the same meal. Try that for at least 2 weeks up to 2 months, even if you suffer from seasonal allergies! You must try new things that are safe, non-toxic, non-invasive for your health, because no one can do it for you.

About the Author: Dr. Michael McCall

Dr. Michael McCall is a Chiropractor, Certified Applied Kinesiologist and Adjunct Faculty member of the National College of Naturopathic Medicine and the University of Western States. He also holds a Masters in Human Nutrition and Functional Medicine. Visit him at his practice, Source Health Center in Beaverton, Oregon.